2pm on my most recent Christmas day: Prawn cocktails scoffed, martini glasses in the sink, painted with scraped remainders of Marie Rose. Cat fishing at shells and tails in the bin, being chased out in in a whirlwind of fur and snarls by sir barkypants. Brussels sprouts baconised and just finishing their charring on the barbecue. Australian men hovering around it, not quite sure how to act when there are not sausages to aimlessly and needlessly turn while they natter about footy and evaporate brewskis. Australian women tottering into the kitchen on festive heels, seeking pink Champagne and a salad to toss. Baby refusing to nap, eating mum’s party hat instead. Children nerfing each other and spraying silly string onto the perfectly set table. Bird primed and resting in the oven, perfectly cooked by someone else and sneakily picked up by me at 11am. And a Swiss dude at the stovetop, juggling four pans, free range bacon and a kilo of butter, making one hell of a mess whilst teaching me at 200 decibels over the rest of Christmas din, how to cook roesti. Wouldn’t have it any other way.

If you haven’t had the privilege, there’s a simple instructional guide on how to make roesti on The Spruce. When it comes down to it, there’s not really anything at all that hard about it. The only issue is turning the confounded thing over. It’s like trying to flip a hot and slightly wet 500-piece jigsaw puzzle onto a moving coffee table. The Spruce suggest a plate. Jono, my Swiss dude (yes, I know, that’s a remarkably Aussie moniker for a Swissy) likes to do it freestyle. He says the reason he can flip it in the pan (a-la-pancake) is because he parboils the potatoes and chills them, so they’ve released their starches and the fragments stick together better. Secondly, he says you can never have too much butter – it works like glue between the potato strips, but like the opposite between the potato and the pan. The third reason is because he is a legend. His words, not mine.

Or, you can cheat, like I did with this one, and add egg…

(Two recipes below – they go with each other and a side of sweet chilli sauce quite nicely, but you could just as easily separate them; e.g. put poached eggs and hollandaise on the roesti, or throw that zucchini on a piece of grilled sourdough or lamb backstrap) 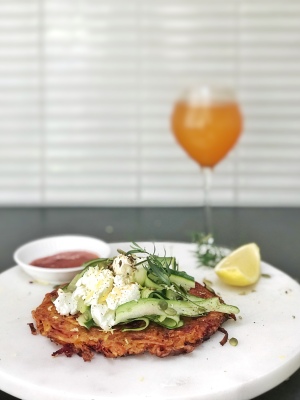 Combine all other ingredients in a bowl, then add to the pan, shaping into a tight circle about 1cm deep, and patting down with a spatula to compress. Keep the pressure on every now and then as it cooks.

After 5 minutes, lift a corner gently and check if the underside is golden-brown. When ready, flip (by hand, or with a plate). Add a little more butter to the pan and shake a little so it gets underneath. Repeat as with the first side, then serve immediately.

Peel the zucchini into ribbons and arrange so there is air and space (you don’t want all the ribbons laying flat on top of each other). Spoon goats curd on top and scatter pumpkin seeds.

Fry fennel seeds in a little butter, then sprinkle on top of the goats curd.

Season with lots of salt and pepper, lemon juice and olive oil, and then garnish with some finely grated lemon rind and sprigs of tarragon. Serve immediately

One thought on “Sweet potato and beetroot roesti”