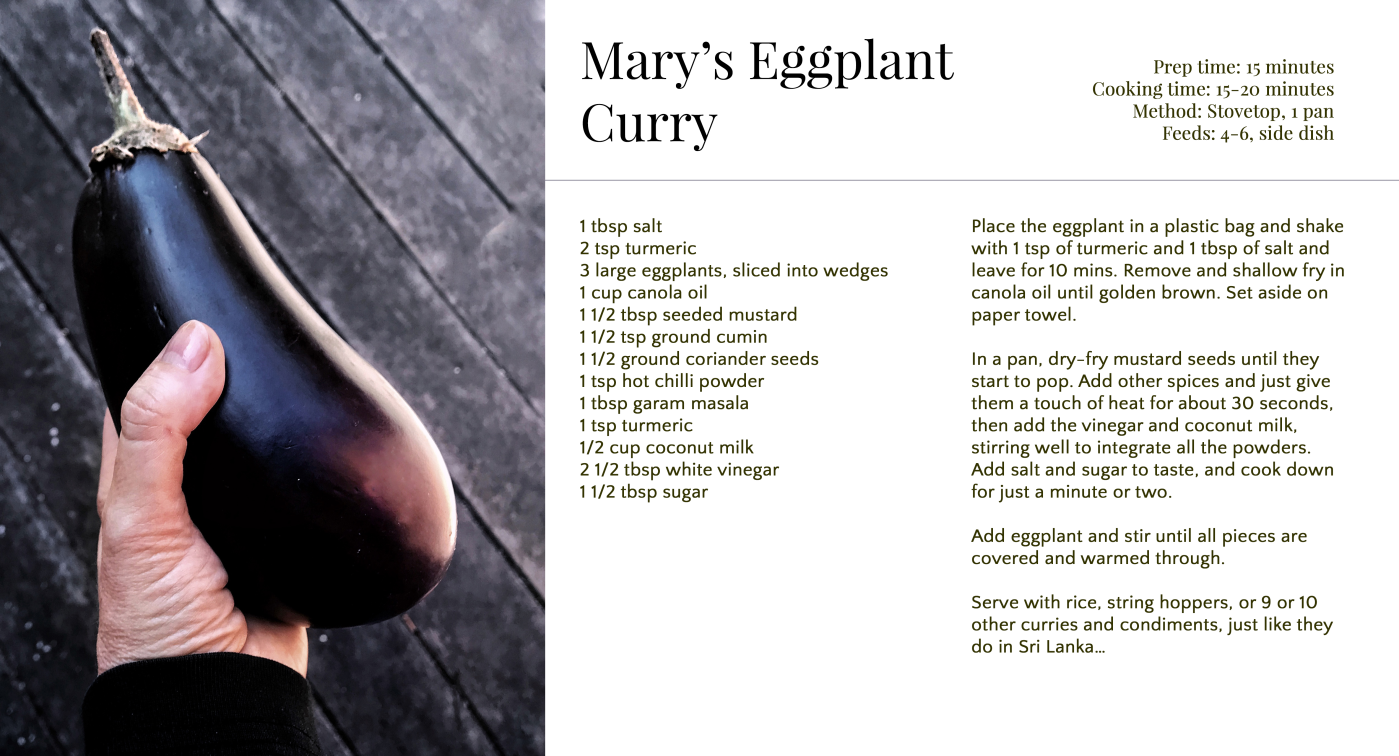 Watching Mary cook was a wonderful thing. No measuring bowls, no gadgets, no timers, and no timing. Lunch might be at 12:30, or at three. But as soon as you catch a scent of her art in the kitchen, you wouldn’t mind waiting. You’d know that when it arrived, it would never simply be curry.

When at work, Mary would pace from one end of the bench to the other, rubbing her thumbs and forefingers together, sometimes even shaking her hands in desperation, searching for that perfect ingredient. The entire bench would likely be covered with crumpled shopping bags full of spices that looked like weeds and dirt but smelled like heaven. Sometimes I would see the proverbial idea-globe light up like a halo, and she’d rush to the pantry to retrieve something obscure like maple syrup or Teriyaki marinade. Mary cooks like a mad professor, writes her curry like a story. Every time it has a slightly different ending, but it’s always happy, balanced, complete, and often with a twist in the tale. 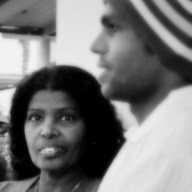 But Mary never actually writes anything down – she can’t read. She won’t follow a recipe, and doesn’t believe anyone should cook anything they have to take from somewhere other than their own soul. Sometimes I would study her with paper and pen out, and she would purposely over-fill teaspoons, go too fast, sneak pinches and adjust later, just to make sure I was watching and learning HER way. For Mary, cooking is always done by feel. She would dip a teaspoon in, drip it onto the skin above her thumb like a piece of snuff, taste it, assess, shake her head and then resume pacing and searching. Always more salt, more sugar.
She didn’t introduce me to curry leaves, rampe or tamarind, but for some reason, they never tasted or smelled as good as they have since I learned to cook with Mary. She used to take over the kitchen on a Friday, cooking for her husband on his weekly visit, and all our neighbours would know. Sometimes they would feign reasons to visit, and end up staying for lunch. One by one, our family would also poke noses into the kitchen, lift lids on pots, peer over her shoulder while she stirred. She would click her tongue and says “It’s ok, Madam. I made for you. This for the boys – no chilli. Here for Sir. Special sambal – good for sinus.” She would laugh sometimes, catching me with my hand in the proverbial cookie jar and exclaim “OOOOHHH, Madam! Don’t eat that! Too hot for you!” even though she knows by now that she has tempered my tongue, I eat chilli like a Sri Lankan.
I used to try and trap her. I’d go to some of Dubai’s amazing Indian supermarkets and bring home vegetables that looked like stringy beans from a triffid, gourds covered with acne, troll-like root vegetables covered in dirt. None baffled her, and always found their way to the plate with success. I tried, on several occasions to see if she could work her magic with more western ingredients – she would attack smoked salmon, rhubarb or chantarelles with similar gusto. Results would be like nothing I’d ever tasted before, but always good. Sometimes I would display my envy by throwing down some basic ingredients, a vague recipe and command, and walk out the door on Madam’s expat business – hoping in some insane way, that she could not roast a chicken, crumb a cotaletta milanese, crackle a belly of pork. She can, even if she’s only ever watched me do it.
Mary’s no longer with us – not in the devastating sense, she’s alive and well, probably cooking at this moment for a cast of thousands in her home town of Badulla in Sri Lanka’s hill country. When we returned to Australia for good, our available funds and acceptance in this culture for retaining a maid-slash-nanny-slash-paid-mother-figure were lost to us. I think of her at least once everyday. Sometimes, yes, it’s cleaning the toilets or ironing sheets, but more often than not, it’s in my too-quiet kitchen, while I’m staring at a pan of something that doesn’t taste quite right and seems to need a smidge of Mary.  When it gets bad, I cook this – my favourite one of all her recipes, written in secret…

Place the eggplant in a plastic bag and shake with 1 tsp of turmeric and 1 tbsp of salt and leave for 10 mins. Remove and shallow fry in canola oil until golden brown. Set aside on paper towel.

In a pan, dry-fry mustard seeds until they start to pop. Add other spices and just give them a touch of heat for about 30 seconds, then add the vinegar and coconut milk, stirring well to integrate all the powders. Add salt and sugar to taste, and cook down for just a minute or two.
Add eggplant and stir until all pieces are covered and warmed through.
Serve with rice, string hoppers, or 9 or 10 other curries and condiments, just like they do in Sri Lanka…